I absolutely love any kind of Asian cuisine. Chinese, Korean, Japanese, Thai, Vietnamese…I can’t get enough of it. Today I’ll be sharing a tasty recipe for making the most addictive instant pot Korean short ribs. I say addictive because it has all the makings of a phenomenal dish–tasty, fall-off-the-bone short ribs, a bomb sauce, and so much more. Just don’t be surprised when you find yourself craving them on a near daily basis like I do. They’re that good!

There’s a very good chance that this will end up being the only short rib recipe that you’ll be needing from here on out. So with that being said, the trick is to get the DIY sauce done just right. 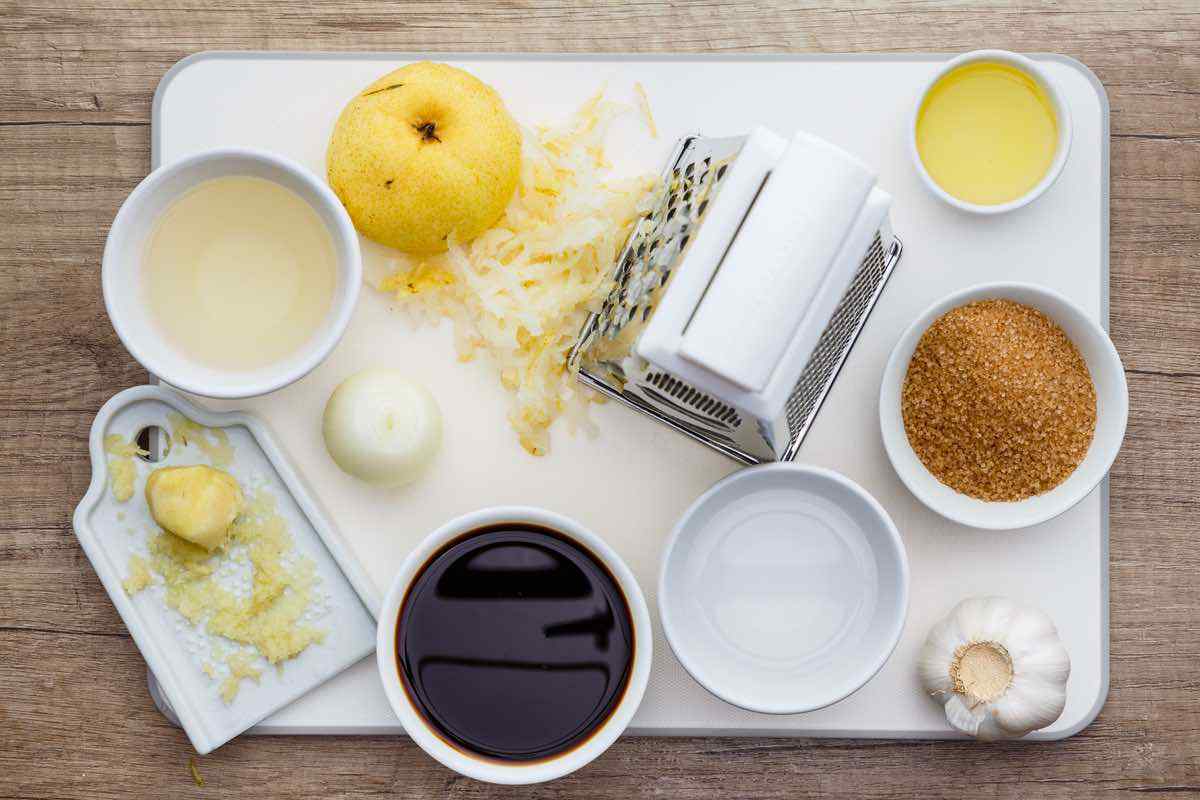 When you’re making this recipe, the first thing that you’ll want to do is get your instant pot out and then add in ½ cup of soy sauce, ¼ cup of water, ¼ tablespoon of mirin, a one inch of ginger that has been peeled and grated, ½ an Asian pear, ½ of a small onion, two minced garlic cloves, one single tablespoon of roasted sesame oil, four tablespoons of brown sugar, and just a pinch of black pepper. 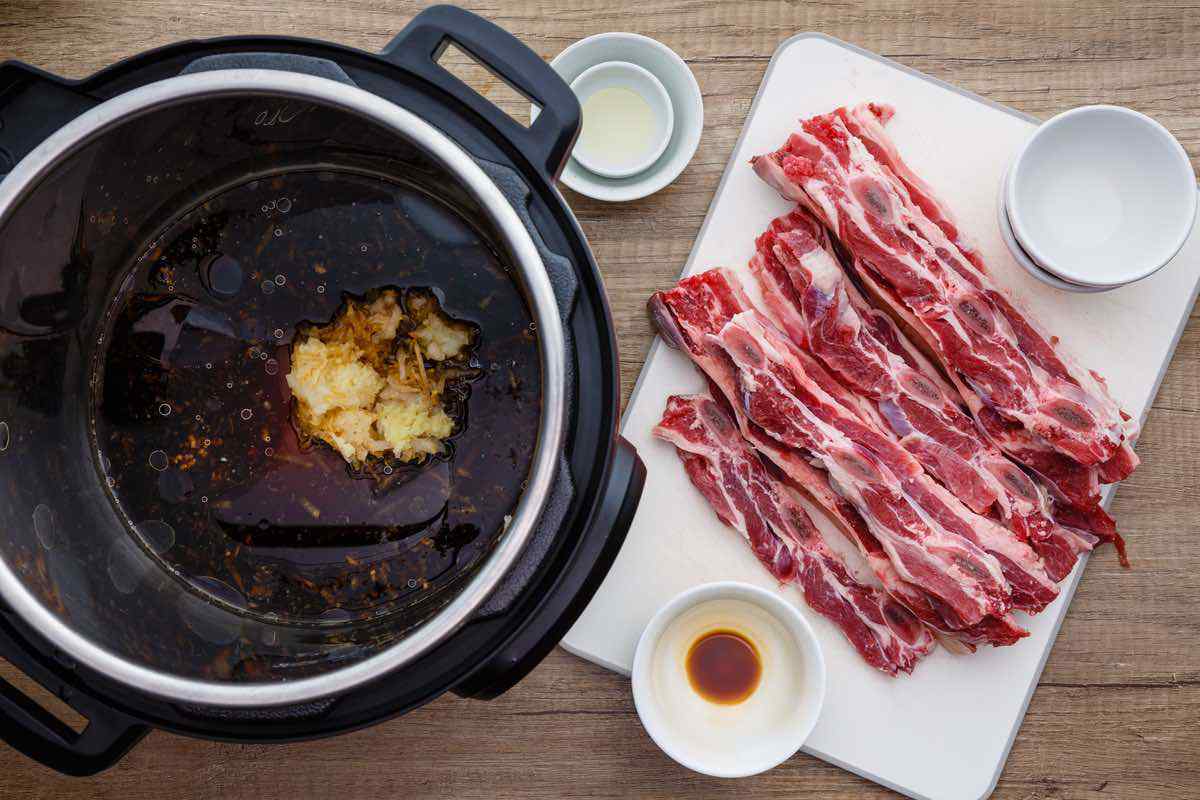 Stir everything together inside the instant pot until it’s all well combined, and then go ahead and add in your short ribs, tossing to combine. Next, seal up your instant pot and set it to ‘PRESSURE COOK’ mode with the pressure set to high. 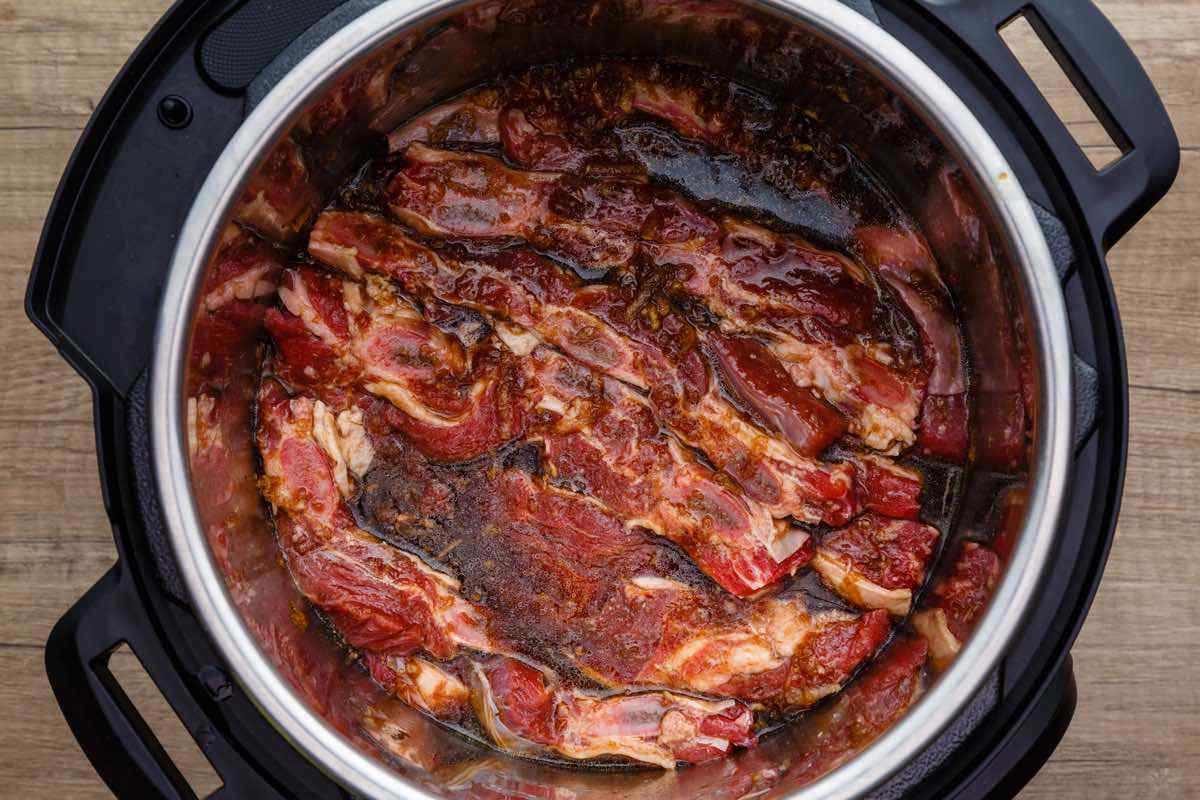 Cook your ribs for approximately 25 minutes, and then release the pressure of your instant pot according to the manufacturer’s directions. Open the lid up, take out your ribs, and then press the ‘SAUTE’ button next. 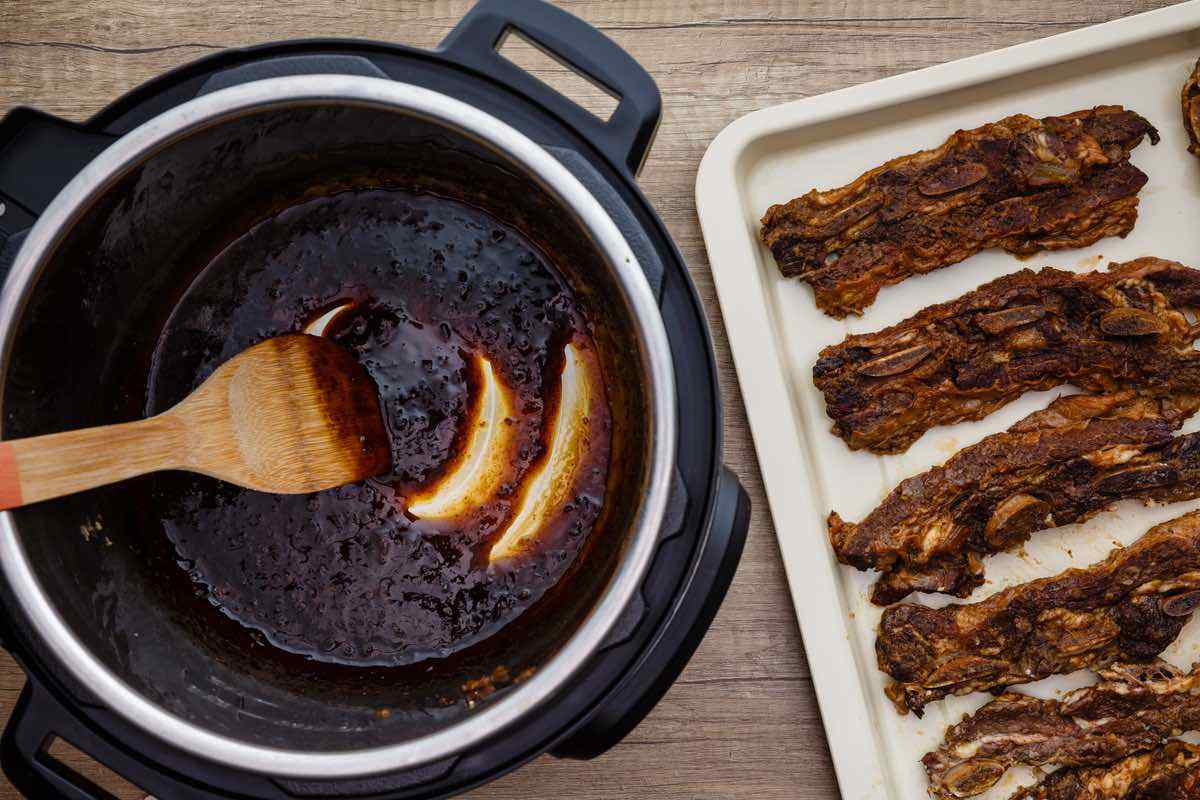 Continue to cook your sauce, stirring it until the liquid becomes thick and glazy. Press the ‘CANCEL’ button on your instant pot and then spoon the sauce over top of your short ribs, tossing to coat.

You’re going to want to serve the ribs immediately, garnished with a bit of chopped scallions. 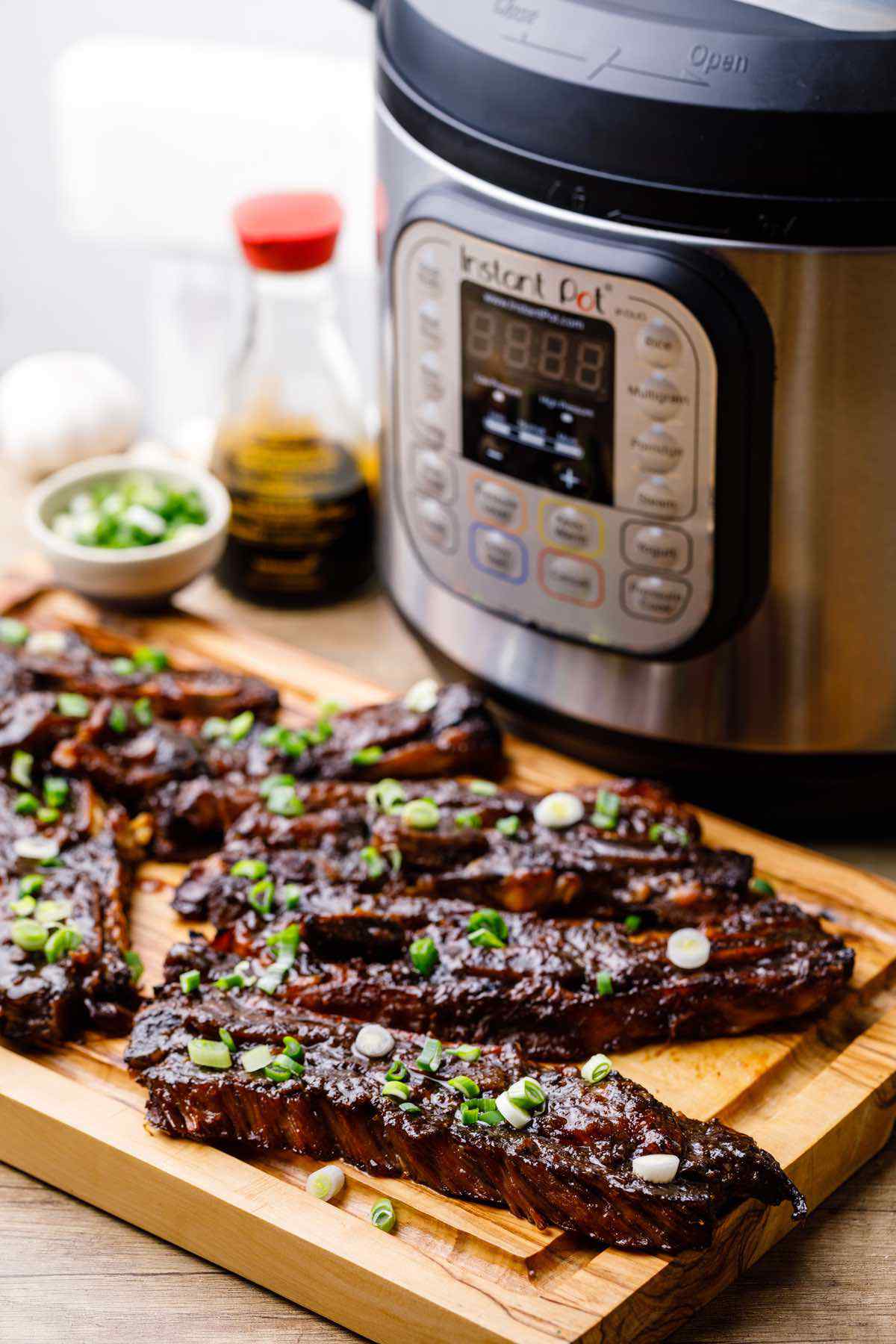 Other Short Rib Recipes That Will Blow Your Mind

There are plenty of other fantastic instant pot recipes for making ribs that you can enjoy if you can’t get enough. As a matter of fact, here are five of the very best instant pot rib recipes that I know of, all from some of my favorite food blogs from around the web:

Best Side Dishes to Pair with Korean Short Ribs

Whenever I make these Korean style short ribs in my instant pot, I do my best to keep the Korean theme going by serving them with traditional Korean sides. Some of my favorite Korean side options include the following: 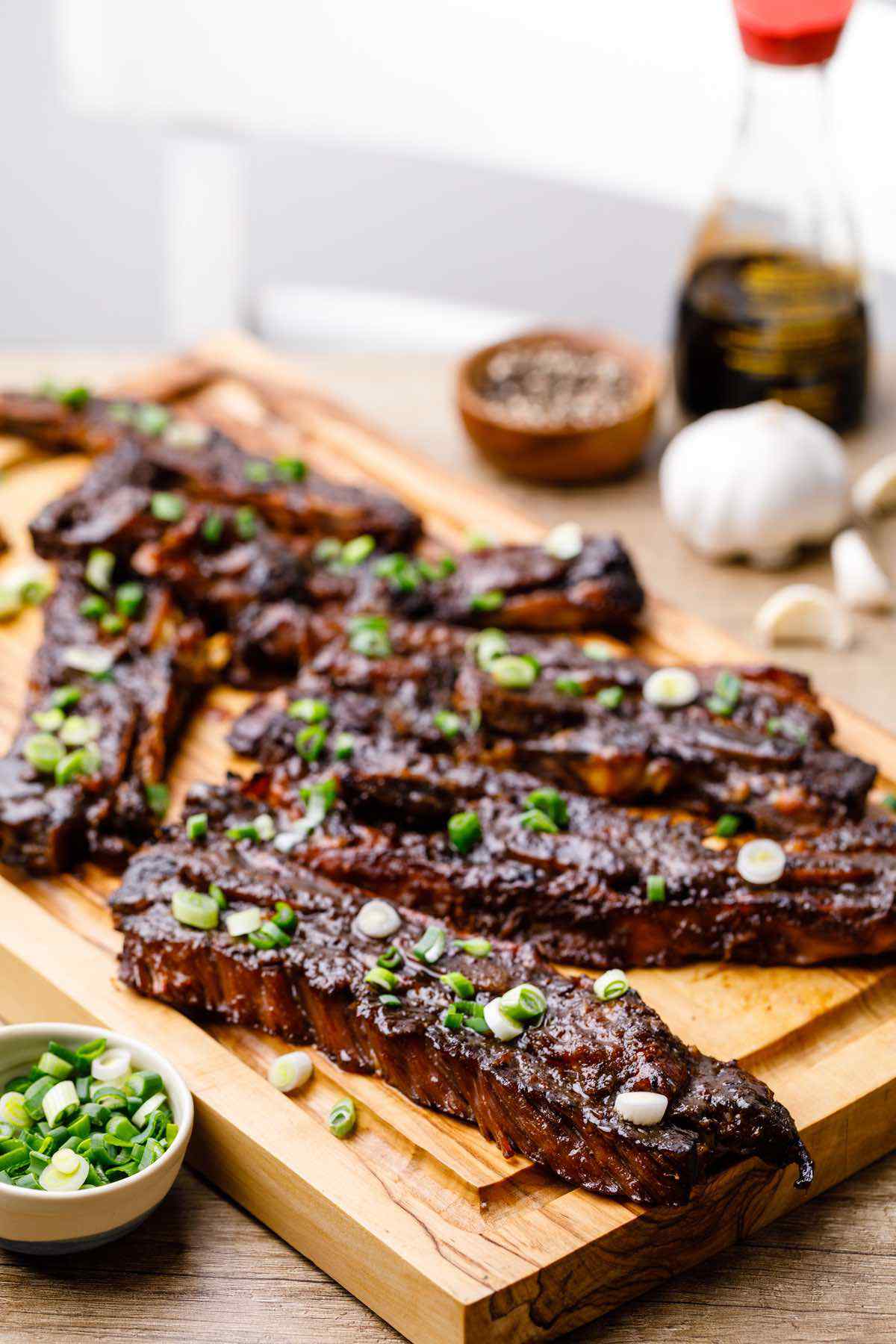 Try: Make a Soup or Stew With These Korean Short Ribs

If none of the side dish recommendations that I listed above sound appealing to you, there’s still always the option of just taking your instant pot and making either Korean short rib soup (traditionally known as Galbitang in Korea) or a stew. Both options end up tasting absolutely incredible!

Can I Use Pork Ribs Instead of Beef For This Recipe?

While this particular recipe calls for the use of two pounds of beef short ribs, it’s definitely perfectly acceptable to use pork ribs instead. One final suggestion I want to make is to just make sure that you stick with ribs that still have the bone in them. They end up tasting way more flavorful that way. 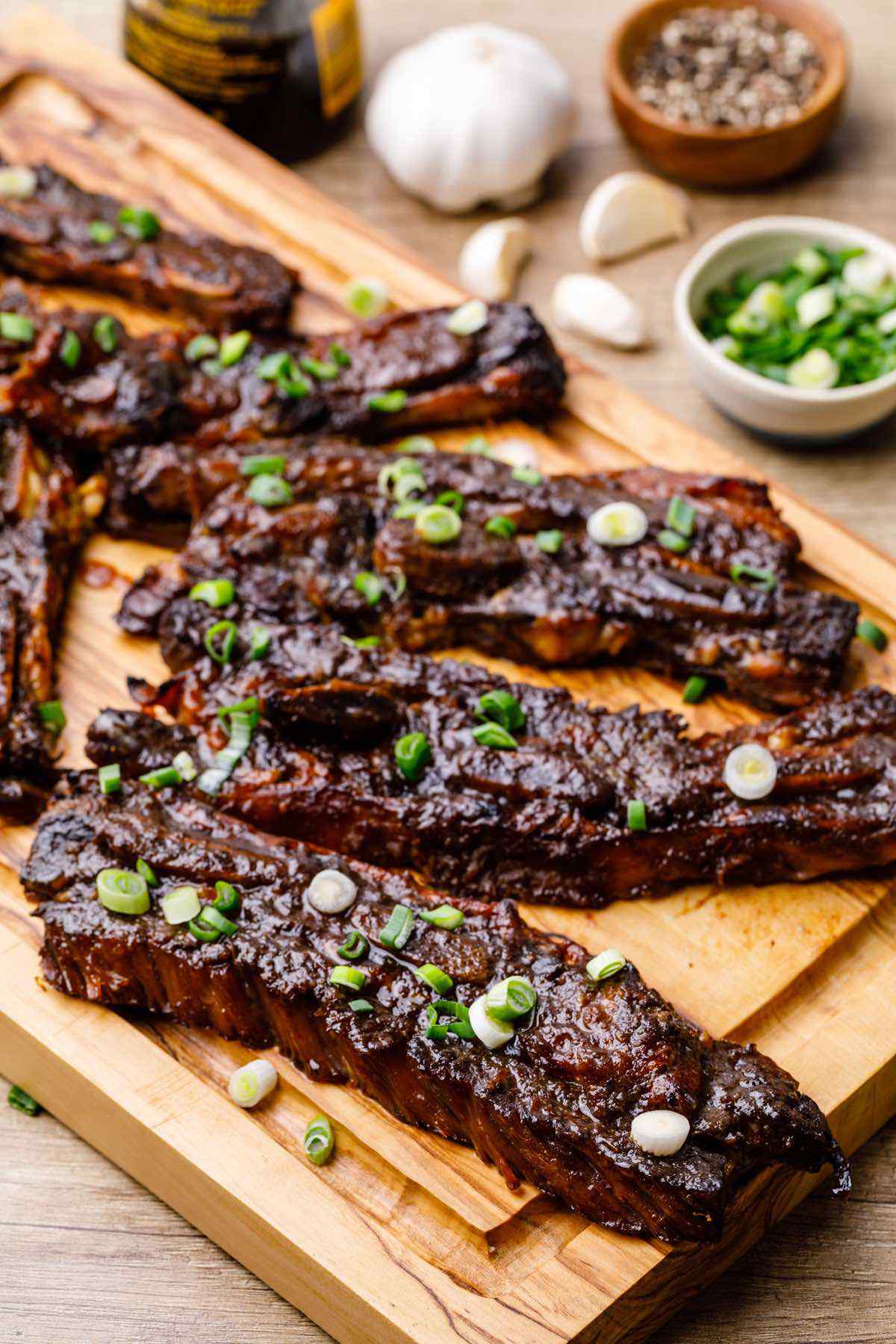 And if you prefer your short ribs to a bit more on the charred side of things, you can simply turn the broiler on in your oven and broil the ribs until they’re lightly charred on both sides. This goes for pork or beef.

(You may also like: Melt in Your Mouth Instant Pot Baby Back Ribs with Homemade BBQ Sauce) 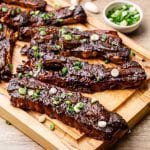