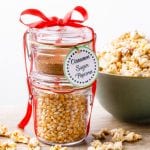 Place the popcorn kernels in a jar.

In a small bowl combine the brown sugar, cinnamon and salt.

Transfer the sugar mixture in another jar and seal it.

Print the recipe tag on card stock and cut out.

Attach the tag to the jar.

Decorate the jar as you wish.

Use an air popper to pop the popcorn.

In a small saucepan melt 4 tablespoons of butter.

Add the cinnamon sugar mix and cook until thick and bubbly.

Spread the popcorns in a large pan.

Pour the cinnamon butter mixture over the popcorns and toss to coat.

Bake in preheated oven at at 300°F for 10-15 minutes, stirring occasionally.

Take out of the oven and keep stirring the popcorns every few minutes or until cooled.