Homemade brownies always work to make your house smell like someplace special, and these brownie recipes are sure to make your friends and family happy. Each recipe takes brownies to an entirely new level with tasty ingredients and a few surprises along the way. 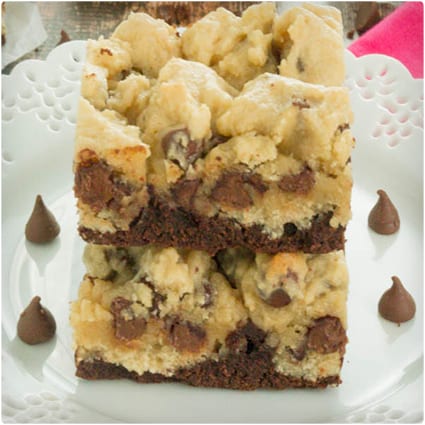 Let’s get the brownie party started with cookie dough, since there’s really no better place to start. These brownies are packed with the taste of cookie dough and are a hybrid between chocolate chip cookie and brownie. Milk is definitely not optional! 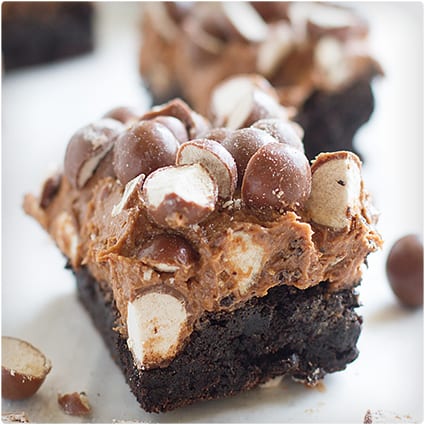 Malted milk powder and malted milk balls provide the double malt action in these brownies. You’ll get a nice crunchiness on the top of these from the malted milk balls, and there’s plenty of cocoa powder used in the brownies so the taste will be double chocolatey too. 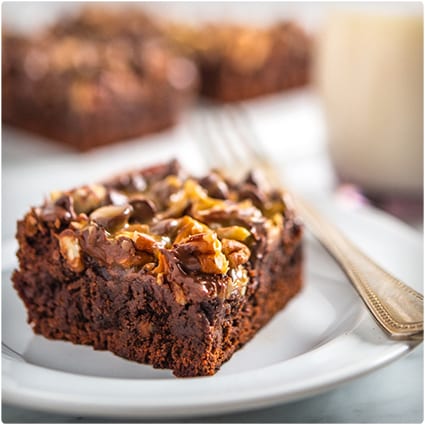 These brownies taste like they have pecan turtles baked right into them, but you don’t have to buy any turtles to make them. They replicate the taste by providing the caramel and pecans, and the brownie serving as the source of chocolate flavor. 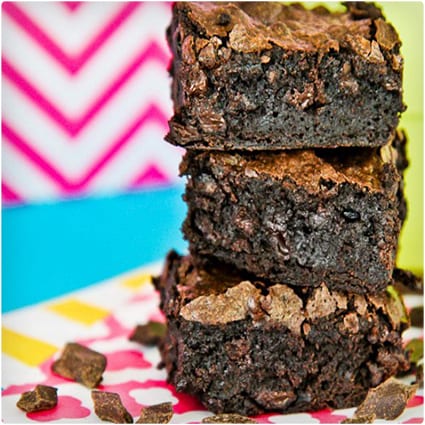 Get your caffeine buzz on with these coffee brownies. They taste like the coffee is infused right into them because it is. You end up using two tablespoons of espresso powder, and for the uninhibited she says you can double this for even more coffee flavor. Go big or go home, right? 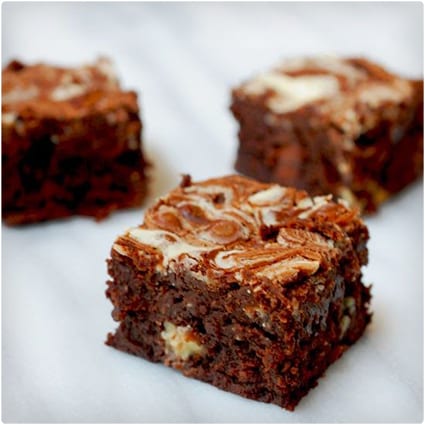 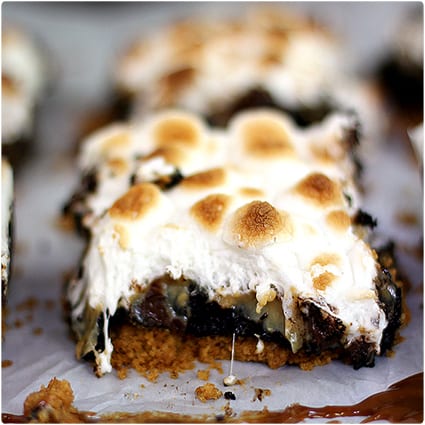 There’s a lot going on in these brownies, including a delicious dulce de leche caramel swirl, and all of the usual suspects for s’mores. She’s somehow managed to get everything to coexist in this brownie so it’s easier to eat than a s’mores and no fire needed. Great for a rained out bonfire or camping trip! 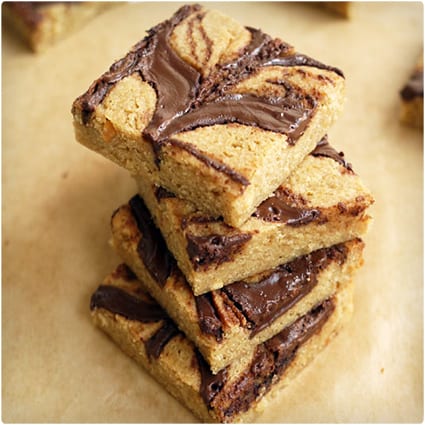 No brownie recipe list would be complete without at least one blondie on it. These blondies have both peanut butter and Nutella as the not-so-secret ingredients. These are a nice break from the typical chocolate-to-the-extreme brownie overload. A more subtle taste but definitely worth trying. 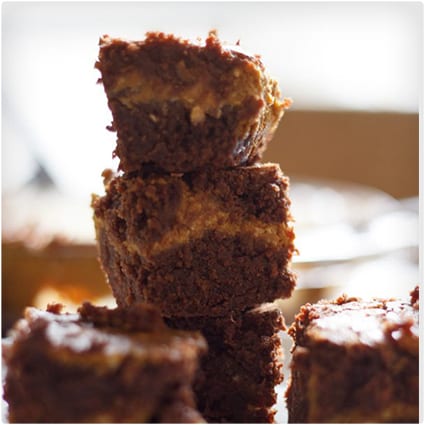 If you’re a fan of pumpkin cheesecake you should try it in the form of a brownie. The two flavors blend well together, and this makes a great segway into fall, or can be eaten anytime you get the craving for a brownie with a delicious twist. 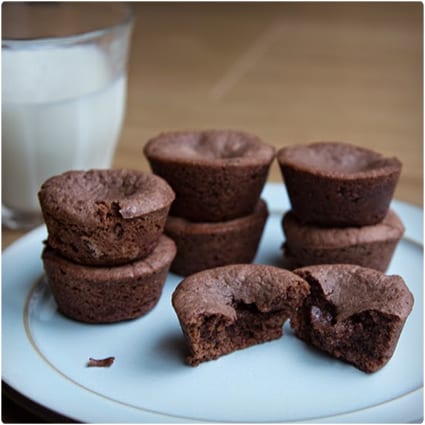 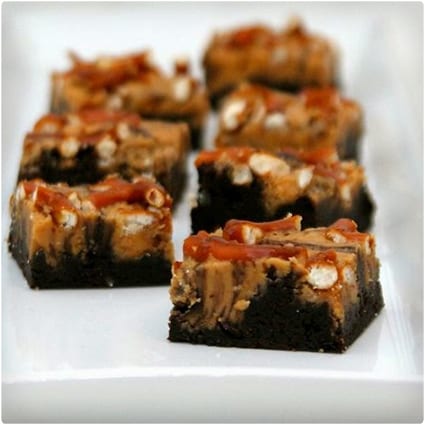 These brownies are like a Take 5 candy bar that’s been smashed onto a brownie. It makes a lot of sense that bakers are playing around with brownies because they make the perfect canvas for creating something new and exciting and even more delicious. 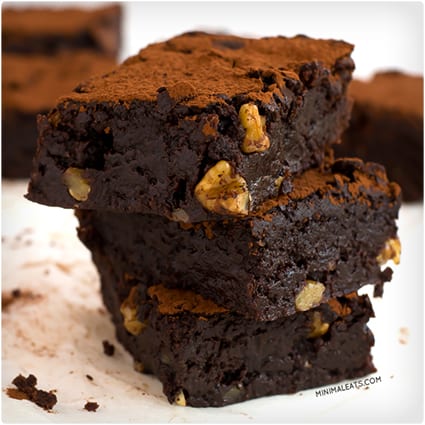 Vegans have found ways to make some of the most delicious desserts you’ve ever tried, so don’t shy away from this if you’re not a vegan. You can eat these with peace of mind knowing that no animal by-products were used, and just relish in the intense flavor. 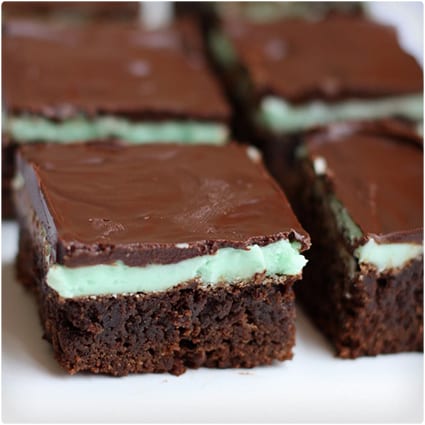 If you prefer your brownies to have a cool minty taste to them, these are the ones to bake up. They have a peppermint layer right underneath the top layer of chocolate glaze, so you’re getting mind sandwiched by two layers of rich chocolate. Thin Mints and Andes lovers should give this a go. 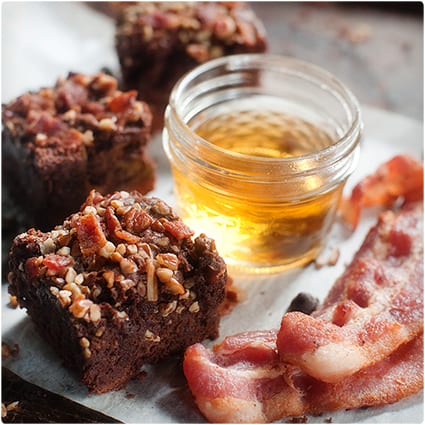 Wondering what brownies to make that will satisfy a man’s most basic cravings? These brownies use the savory flavor of bacon and the deep flavor of bourbon to create a taste sensation he won’t see coming. The manliest brownies you can make! 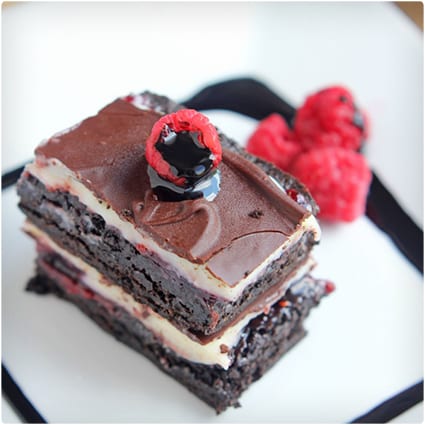 These brownies have layers that you’re sure to love, with a layer of cream and a layer of raspberry hame, there’s plenty to slow down for. There’s a chocolate glaze for the very top of layer, so what initially hits your palate is of course chocolate, followed by everything else. 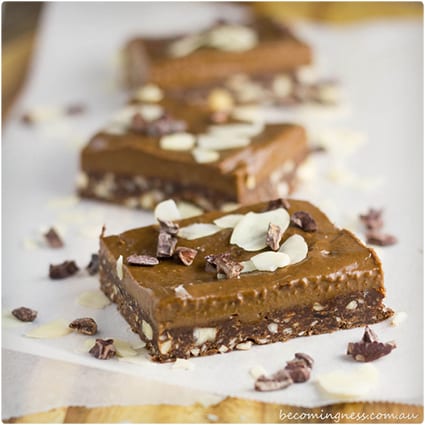 No baking required with these raw chocolate mousse brownies. You mix everything up as directed and pop them in the freezer to set. She’s even managed to sneak an avocado into these, so you’ll get a creamier texture and some nutrition to boot. 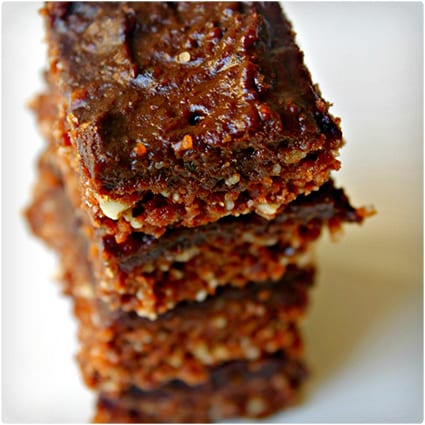 Wonder what a hot fudge sundae would taste like if it were crammed into a brownie? Wonder no more with this recipe, which uses no real hot fudge and manages to keep things gluten-free. These brownies are raw as well, so no turning on the oven for delicious-tasting brownies. 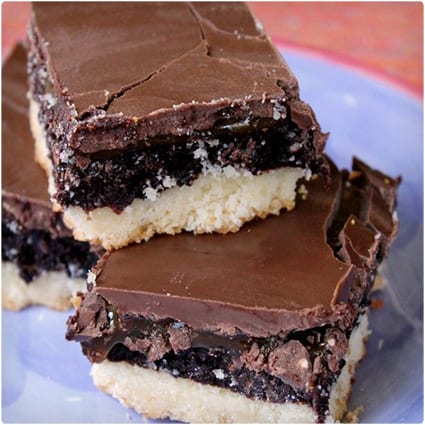 No Twix are harmed in the making of these brownies, but you’ll swear that they were when you bite into them. Erin refers to these as a love-child between a brownie and a Twix bar, and has managed to incorporate the essence of a Twix into the form of a brownie. Well done! 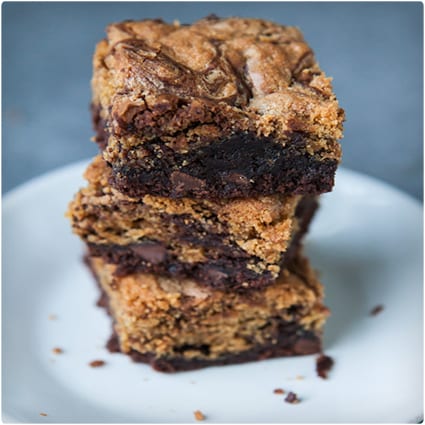 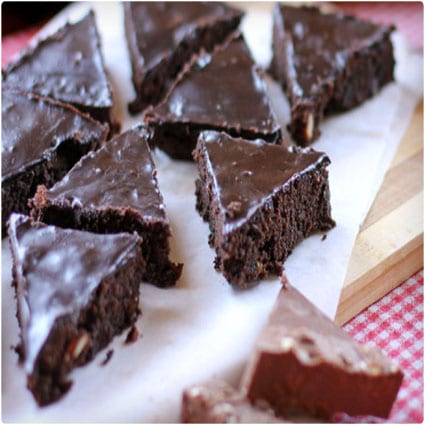 These brownies use actual Toblerone pieces in them, so there’s no denying that they taste a lot like their namesake. You can even cut them up into triangles as shown to try to drive home the message that these are in fact unofficially sanctioned Toblerone brownies. 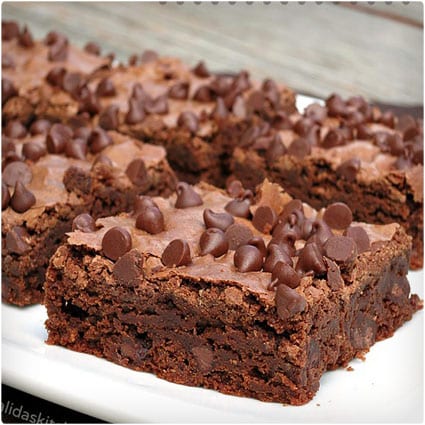 Don’t let the olive oil fool you into thinking that these brownies will taste any different than a brownie should. In fact they taste exactly like you’re expecting a brownie to taste, with all of the ingredients needed, plus additional olive oil to make them just right. 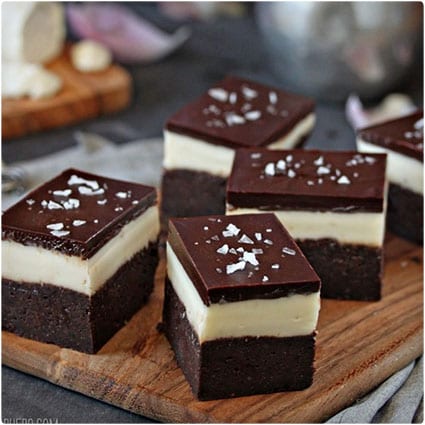 These might not strike you as the tastiest brownies ever, especially if you’re not too familiar with goat cheese. But make them once out of blind faith and you’ll surely make them again. Who knew goat cheese was one of the best ways to top a brownie? 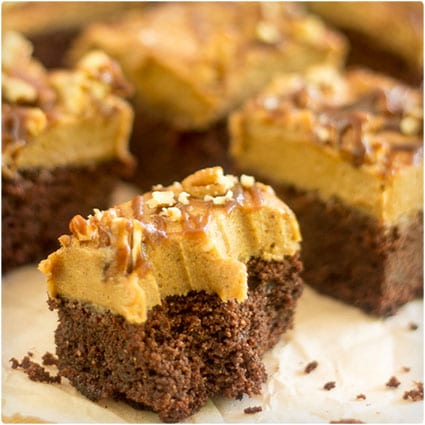 These salted caramel brownies have a pretty extensive ingredient list, but they’re worth the trouble for how tasty they are. This recipe is also a Paleo recipe, so it will be gluten-free and may have some ingredients you’ll need to pick up just for this recipe, but again they’re totally worth it. 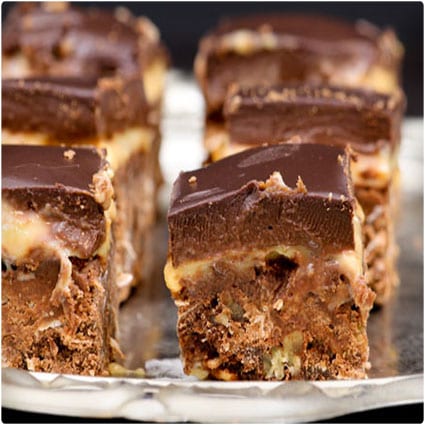 Here’s a batch of brownies that comes with a nice surprise. They have an orange custard that rests atop a chocolate brownie, and then a top layer of chocolate ganache so the orange is sandwiched between two chocolate chunks. It’s quite the taste sensation if you like chocolate oranges. 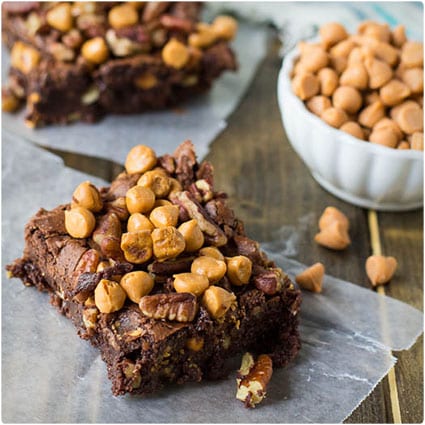 It’s always nice when a brownie delivers on the promise of its title, and these Butterscotch Pecan Brownies do just that. You’ll get a mouthful of butterscotch flavor mixed with crunchy pecans in each bite. What more can you ask for? 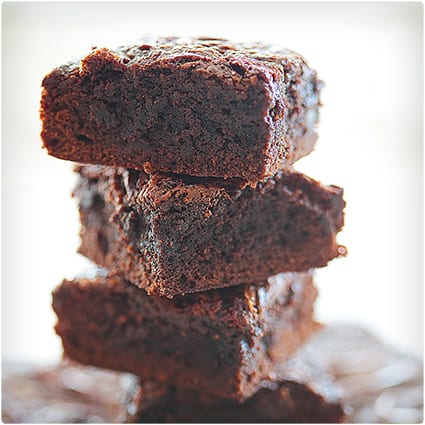 Chocolate and caramel join forces in just the right ratio with these brownies. There’s not a lot going on with these, so you are able to focus on the richness of the chocolate and caramel. While not as flashy as some of the other brownies featured here, they’re definitely worth trying out. 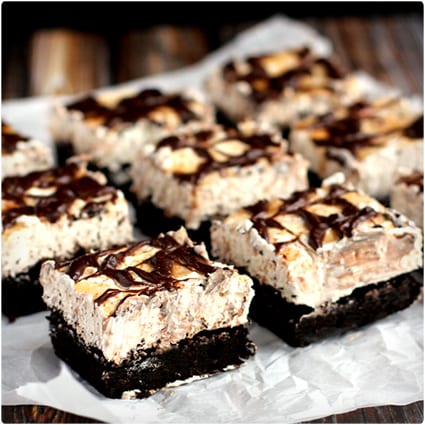 This is an interesting way to get snickerdoodle cheesecake and brownie flavor in one dessert. It contains a special coffee blend called Snickerkicker, which makes an appearance in the brownies, the cheesecake, and the ganache for the top. 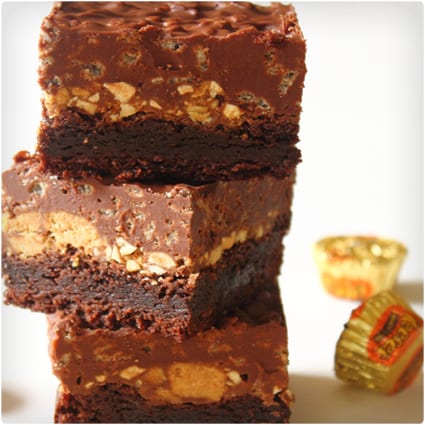 What happens when brownies eat peanut butter cups? Awesomeness! The funny thing is this recipe doesn’t use any peanut butter cups, but deconstructs them so that you’re getting all of the flavor. There’s even some rice cereal used to give it a crunchiness. 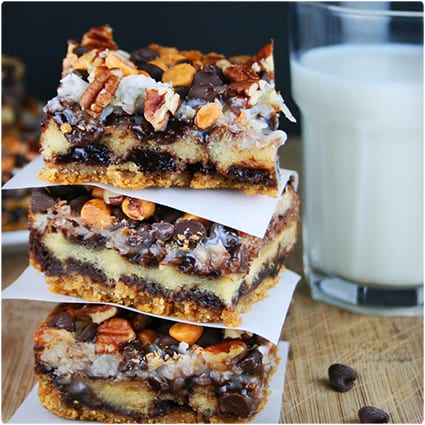 You’ll be telling everyone to leggo your Eggo when you make these brownies. They’re actually made with Eggo waffles, and come out looking like a cross between a brownie and a cookie bar. There’s plenty for your taste buds to marvel at with this dessert sensation. 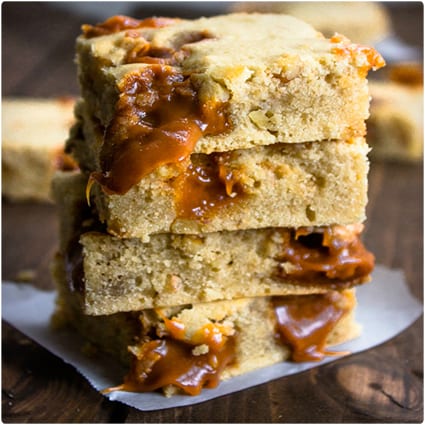 These blondies really lay on the caramel with the use of Lancaster Soft Cremes. Since they’re a blondie you’ll be able to taste the caramel even better since it won’t be fighting with the taste of chocolate. The blond brownie serves as a nice backdrop and these are a sweet treat you won’t soon forget.

Kahlua fans now have a brownie to call their own. This recipe fuses the taste of Kahlua with the richness of chocolate and caramel brownies for a brownie you should really make two batches at a time. These are perfect for entertaining, and you’ll wish you’d doubled the recipe after you taste them.