What is one of the best ways to chase off the chill of Winter? A heaping batch of homemade cinnamon rolls! This collection of recipes covers all the bases, from no-yeast to overnight preparations. In addition to this, there are also some flavor variations from the traditional profile, thanks to such ingredients as pumpkin and sweet potato. 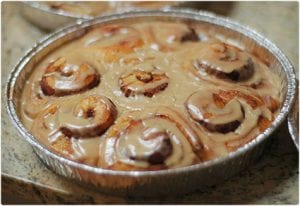 Coming from the kitchen of a city girl turned country wife, this tutorial for making cinnamon rolls is pretty nifty. It gives you pointers and tips for how to make them from scratch, including a delicious maple flavored icing to drizzle/drench them in. 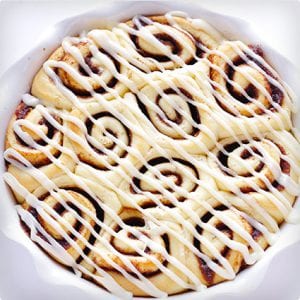 Making cinnamon rolls from scratch often calls for long waiting periods while you wait for the yeast to rise. If you are a bit pressed for time, or don’t like having to wait for yeast to rise over the course of hours, or overnight, this recipe is perfect for you. 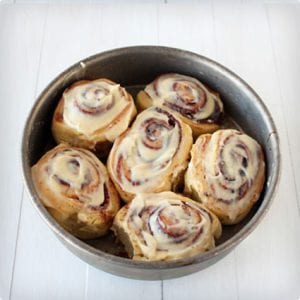 This handy tutorial not only gives you a great recipe for homemade cinnamon rolls, it includes a video as well. Made using fresh ingredients, these rolls are sure to be a crowd favorite, especially if they enjoy a good cream cheese frosting. 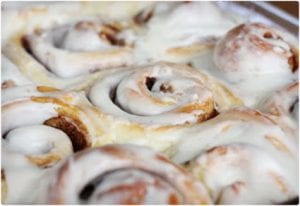 Utilizing rapid yeast, this is another recipe that won’t take a long time to fix. In addition to this aspect, the guide gives plenty of helpful tips and tricks for how to prepare them. If you want to try out other recipes for cinnamon rolls, they also provide links to more traditional, overnight variations. 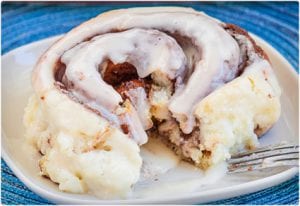 Cinnabons is a world famous brand of cinnamon rolls and in this recipe this home cook uses is claimed to be as close as you can get at home those pricy buns. As an added kick of authenticity, you can even use Cinnabon brand cinnamon, which is available in some stores. 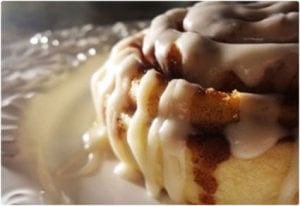 Coming in at a little over an hour in total time to cook, this delightful recipe is great for people just starting to dabble with homemade baked goods. The included frosting recipe is a pleasant vanilla icing that is also easy to whip up and keep in mind for other kitchen projects. 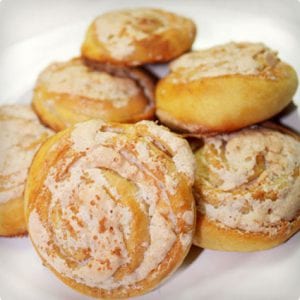 While it may sound a bit strange, this recipe is definitely not your traditional cinnamon roll. Using a filling that is comprised of whipped egg whites and cinnamon, it produces a tasty and crisp topping with a tender and tasty inside. 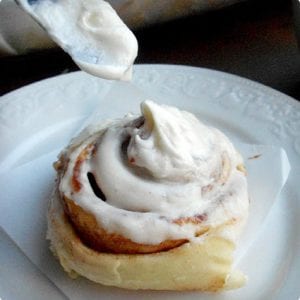 Cinnibons are addictive and expensive goodies that are hard to replicate at home. That is, until this recipe came about. Between the ingredients and specific steps, this is one of the best recipes out there to replicate the store version, with the added perk of being less processed.

Covered in a rich layer of frosting, these homemade cinnamon rolls may not really be the world’s best, but they are quite tasty. One thing that really separates this recipe from others is the use of less than common ingredients. 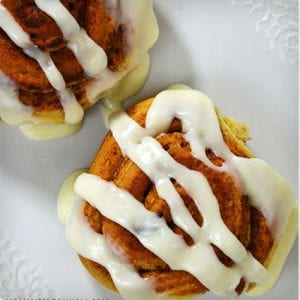 Made without yeast, these cinnamon rolls are quick and easy. No complicated steps, or long rest periods, mix, roll, cut, and bake. For people who like to cook quick and simple dishes, this is a great choice for a lazy breakfast or brunch. 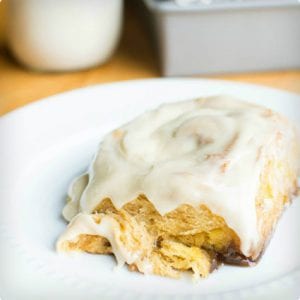 The cook behind these cinnamon rolls makes a lot of hearty claims when describing these. She describes then as being better than the world’s best and even better than Cinnabon rolls. The use of a rather unorthodox ingredient definitely sets these in a class of their own. 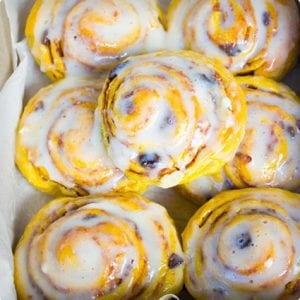 What says Fall and Winter better than the taste of pumpkin and cinnamon together? These dreamy cinnamon rolls are infused with the wonderful combination and should be the official dish of Winter holidays, or cold weather in general. Topped with a vanilla frosting and caramel dressing, you better make a large batch, if you plan to share. 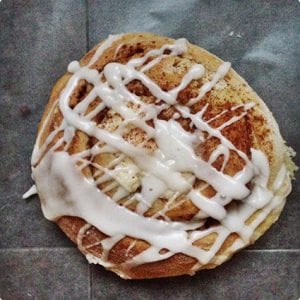 When you can’t decide between having a warm and fluffy cinnamon roll, or a decadent danish, choose both. In this surprisingly simple recipe, you are combining two morning favorites into a hearty and delicious new treat that is awesome for satisfying a sweet tooth and filling your bellies with warmth. 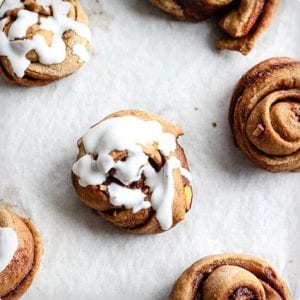 In a somewhat less indulgent take on cinnamon rolls, this interesting cinnamon knot recipe calls for yummy wheat flour, apples, cinnamon, and a light bit of the frosting you enjoy- such as Greek yogurt or a homemade vanilla and sugar icing. 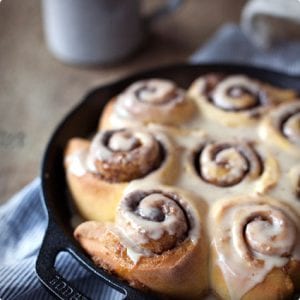 Lovers of maple will delight at these glazed cinnamon rolls, which also have the wonderful flavors of pumpkin and ginger. You can also take the basic pumpkin rolls and glaze them with an alternate icing, or enjoy them by themselves. 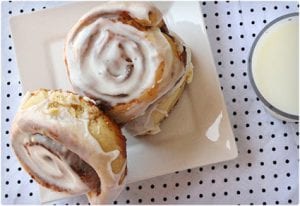 Using a bread machine to start of the dough for these rolls is a great way to reduce the fuss and prep time. With a sumptuous mix of brown sugar and honey, these heartily proportioned rolls are full of flavor and delicate sense of sweetness. 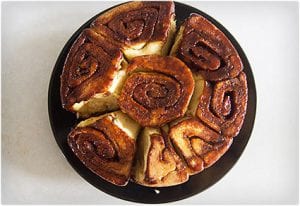 In another no-yeast rendition, these wonderful cinnamon rolls are presented without frosting. The use of palm sugar creates a tasty layer on the top that acts like a baked in icing. Moist, flavor, and fairly quick, these are a great pick for those with little patients or time to spare. 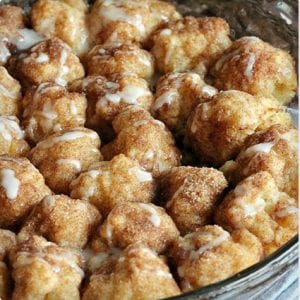 While not an actual roll, or even mini rolls, these tasty bites are still chock full of cinnamon goodness. In addition to being flavorful, they are extremely quick to make, especially if you opt for using pre-made dough from the store instead of making it from scratch. 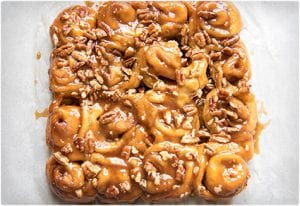 Caramel, pecans, flaky crescent roll dough and of course cinnamon are all qualities that make this recipe amazing. What is even better is the fact that it only takes a total of six ingredients and about 18 minutes to cook them. 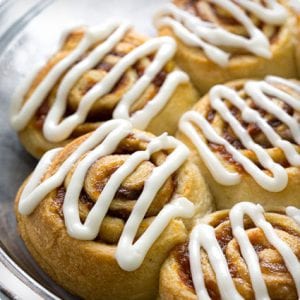 In less than an hour’s time you can have warm and gooey bath of pumpkin cinnamon rolls. Aside from being fairly quick to throw together, they are also extremely simple to make. This short list of ingredients even includes a homemade cream cheese icing. 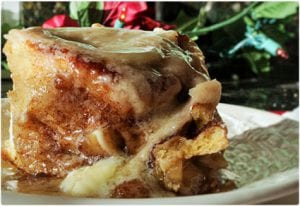 When it comes to making homemade cinnamon rolls, taking some time to follow an in depth recipe can really pay off. These big and hearty rolls are sure to fill your belly and keep you satisfied until your next meal. 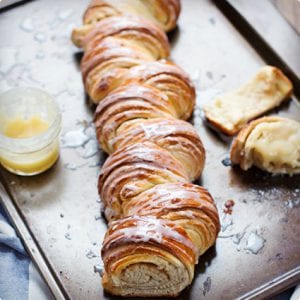 This interesting take on cinnamon rolls is a refreshing and tasty step away from average. Using a somewhat pulla (Scandinavian bread) based bread recipe, the addition of cinnamon and a light homemade glaze makes it a light and flaky treat that is perfect for cool morning times. 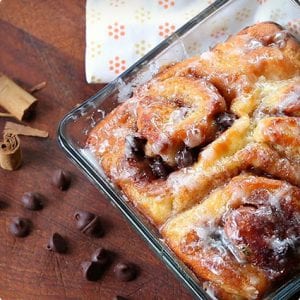 Cinnamon, sugar, and a tasty homemade glaze are accented with semi-melted chocolate chips. This recipe is a wonderful take on the traditional cinnamon roll. The addition of chocolate makes it a great choice for breakfast, brunch, or even dessert. Take into account the vanilla frosting, and you have a tantalizing mix of flavors. 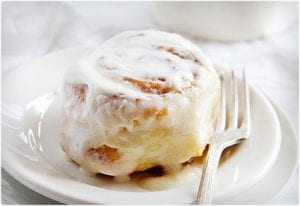 In this quick and simple recipe, the cook utilized what she had on hand, which happened to be ingredients like cream cheese, pizza dough, and a pumpkin spice mix. The end result was an amazingly tasty and easy to fix batch of pumpkin spice cinnamon rolls. 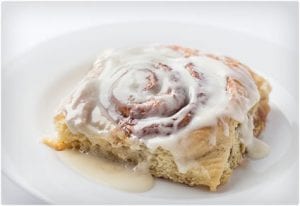 Absolutely divine is one phrase that could be used to describe these gigantic cinnamon rolls. Without exaggeration, they are so big that you can only fit four at a time into a 9” x 13” pan. Based on the home cook’s favorite store version, these are sure to be a hit at your next dinner, or brunch, gathering. 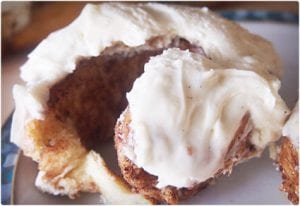 Unlike other homemade cinnamon roll recipes, this one includes a tasty trick for making them awesome from top to bottom. A rich dough that comes out fluffy and sweet, thanks to the preparation done to the pan. In addition to this aspect, the covering of cream cheese frosting accents the rich cinnamon flavor. 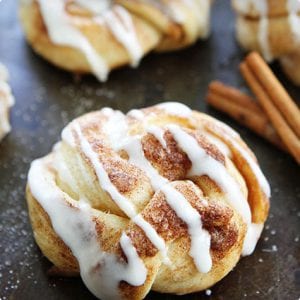 Using either fresh made, or store bought pizza dough, this quick and pretty easy recipe is chocked full of traditional cinnamon roll ingredients, but is shaped into a fun knot instead of a regular roll. If you have half an hour you can try this recipe out for breakfast, or even as dessert. 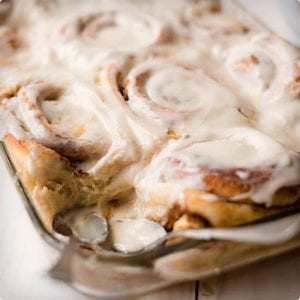 If you have ever pondered making cinnamon rolls from scratch, but were not sure where to start, this is the recipe for you. Taking a bit over two hours to make, this delectable recipe produces the perfect no-fail batch every time. The cook even includes a video to help make sure you understand the directions. 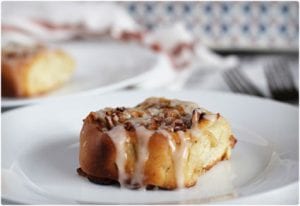 For anyone who enjoys the sweet and buttery flavors of apples and pecans, this cinnamon roll recipe is sure to please. Topped in a simple vanilla glaze, these are the perfect treat for a chilly Autumn day. A warm cup of coffee, or cider, would be the perfect compliment to enjoy these with. 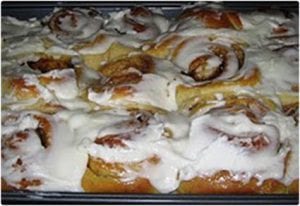 While there are plenty of recipes that call for taking up a whole afternoon, this recipe is a toned version that only requires a couple of hours to prepare and bake. The given directions provide enough dough to make either 24 regular sized rolls or 12 giant sized ones. 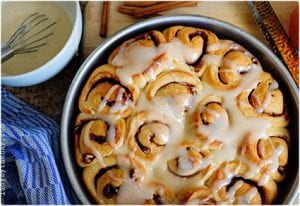 Made with a yummy cinnamon and pecan filling and accented with a touch of orange zest, these yummy cinnamon rolls can be made and frozen for later, or cooked on the spot in about about an hour or less. The use of citrus really brings out the taste of the pecans and cinnamon.